TCEN Member Caleb Orozco blogs about our recent meeting in London
Open a larger version of the following image in a popup:
Share

Of note, LGBT issues in Commonwealth countries have not been dealt with by most governments, because of social stigma and the lack of protections that exists in various countries. However, we have come to learn, when speaking of climate change, the Sustainable Development Goals or national constitutions, that LGBT citizens have rights that are implicit and explicit in many countries. Where the rights are written but do not directly provide protection based on sexual orientation or gender identity, legal decisions in Kenya, Botswana, South Africa and Uganda point out that fundamental rights apply to all citizens, that protection is implicit as well. In negotiations around climate change, no government has argued for language that said, climate change only affects heterosexual citizens. Current language speaks of all citizens. By default or omission, Commonwealth countries have implicitly acknowledged the rights of its LGBT citizens. The point can be made as well that while governments spend millions trying to protect the diversity of their environments,  the reluctance to  invest in the diversity of LGBT citizens reflects a lack of understanding, that Sustainable Development Goals apply to all explicitly and implicitly.

Leveraging international spaces, though, depends on vision, the political position to engage and organisational support for the value of international awareness building and engagement.

Leveraging international spaces, though, depends on vision, the political position to engage and organisational support for the value of international awareness building and engagement. The work of TCEN, supported by the coordinated hands of the Kaleidoscope Trust, offers activists working in Commonwealth countries an opportunity to leverage their national experience into international strategic political engagement, in preparation for the next Commonwealth Heads of Governemnt Meeting (CHOGM) in Malta in November. Coming from Nigeria, Kenya, Sri Lanka Tonga and Belize we met to examine concerns about resistance, strategy and to define processes for engagement at CHOGM. For the first time, as well, the People's Forum has included two session that focuses on  LGBTI policy, one geared towards policymakers and civil society respectively. 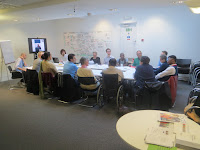 The meeting entailed examining the structure of the CHOGM, examining its decision making processes and mapping allies. It offered Belize a chance to share its seven years of experience at the OAS General Assembly, which included coordinated social media communication, declarations, engagement with the Inter-American Commission, national diplomatic missions and sharing best practices of political engagement back home. Belize's experiecne shows that we can always be smart in our strategies, despite resistance in any institution, and that political engagement is a long-term process. As part of the process, accredited organisations at the Commonwealth were asked to shared their perception of the CHOGM process.

The engagement at the Commonwealth Foundation was valuable as well, for it laid out the the barriers to resource mobilisation, but also offered opportunities for communication with persons working on Universal Periodic Process as well as on National Human Rights Institute. We did not have alot of time, but what we learned had application to how the Foundation is engaged on national issues and on how we comnunicated with allied governments in the future.

TCEN's potential to become a mechanism to leverage Commonwealth systems to gradually respond programmatically to LGBT issues on the ground remains limited only by its imagination in doing political engagement work with vision. 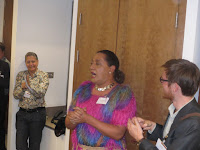 The Commonwealth Foundation meeting was complemented with a panel discussion at Baker and Mckenzie, in London which offered academics, lawyers and representatives from various charities insight into the need to access resources to sustain national movements, national and international strategic responses with activists, bilaterally and diplomatically. Our Sri Lankan, Kenyan, Tongan and Nigerian colleagues presented on points for resources support, but Belize focused on the value of strategy. We only had seven minutes in our presentation, but it was worth every minute. The time was also used to shoot a documentary on Belize's present efforts to decfriminalise, supported by Susan Thompson. At the cocktail, afterwards, Joleen gave the audience a performance that grabbed every single person attention, that was the second time I heard her, the first was at Wilton Park.

On the last day of running around, I met Lord Black and his boss of the Telegraph in London, we spoke of strategy and communication with some specific actions to be done behind the scenes. The value of the conversation was twofold: one, to gauge political thinking and action around LGBT concerns in the UK , and two, to express thanks for Lord Black's statement in Parliament earlier this year on Belize and on LGBT issues in General. 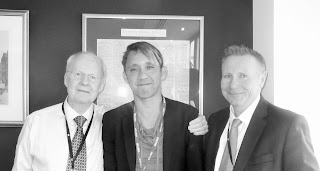 Whether in Grenada, South Africa or at a Human Rights Campaign meeting in Washington, Belize must never forget that its experience and expertise offers others a chance to learn about strategy refinement nationally and the use of a leverage approach in political engagement. What the future brings, only time will tell!

This blog was first published by Caleb Orozco